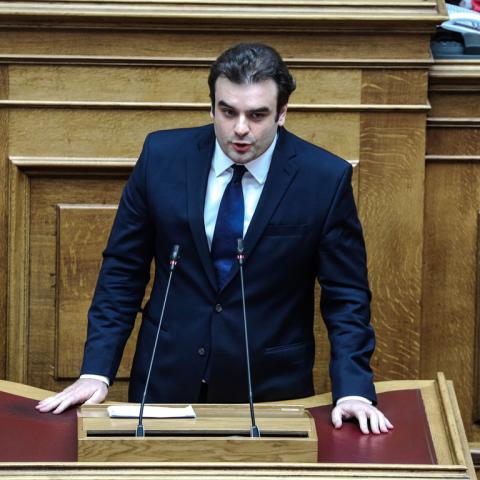 Kyriakos Pierrakakis is a Greek computer and political scientist, politician, and Minister of Digital Governance in the Cabinet of Kyriakos Mitsotakis.

He was born in 1983 in Athens and grew up in the Kato Patisia neighborhood. He is married with three kids.

In 2009 Pierrakakis returned to Greece chairing Youth Foundation as President and working on issues dealing with youth entrepreneurship. He also served as an advisor to Anna Diamantopoulou at the Ministry of Economy and Development.

Since 2015 Pierrakakis served as Director of Research at Dianeosis, an independent non-profit think tank. Pierrakakis produced an array of research papers with a strong focus on economic growth and understanding the prevailing perceptions and beliefs among Greeks.

Pierrakakis began his political career in center-left politics. He was elected member of the PaSoK Political Committee in its 9th Congress in 2012 and in 2014 he was a candidate for the European Parliament. Pierrakakis was placed sixth on the Elia ballot with a total of 42.814 votes.

During the New Democracy – PaSoK coalition government he was member of the Greek negotiation delegation with the “Troika”, appointed by Minister Evangelos Venizelos.

On July 9, 2019 he was appointed Minister of State and Digital Governance by Kyriakos Mitsotakis.